Yes, yes I know. Late again. Things tend to build up, but here it is at last the (possibly) long-awaited conclusion to my series. So without further ado.

The final episodes had to be for me, the most frustrating of all. The attempt at a corny love story, Aethelflead becoming a stock character, and the treatment of the West Saxon nobility in general not to mention that so much of it bears little resemblance to the known historical facts of the time.

So for a brief summary, Aethelflead gets captured by the Vikings camped at Benfleet, and Alfred has to raise a ransom. They lock her in a cell, but she is won over by the courtesy and kindness shown to her by the Viking leader Erik, who protects her from attack by his fellows, and allows her brief excursions outside the camp.

By the end of Episode 7 the unhappily married damsel in distress has fallen madly in love with Erik, made love to him in a meadow, and formulated plans to run away (or more correctly sail away) with him to start a new life. Which thwarts her father Alfred’s plans to secure her release, but the ever accommodating Uhtred is willing to help.

Meanwhile, discontent is brewing in Wessex. Earldorman Odda is not happy with Alfred’s plans to pay off the Vikings to get his daughter back- suggesting that she should instead be encouraged to kill herself to preserve the family honour: and of course save the good people of Wessex money. Horrid, unbending religious fanatic Alfred won’t listen, and proceeds to fleece peasants to raise the necessary dough.

Meanwhile, he sends everyone’s favourite superhero Uhtred to Benfleet along with Lord Ethelred to make sure his daughter is OK, and to commence negotiations. Ethelred gets into an argument, gets knocked on the head, and ends up being tied up naked in the pigsty to get laughed at and to give the audience some satisfaction in seeing the villain humiliated.

Uhtred learns of the threat of a new Viking army, and Sigefrid comes home to the hall to find his big brother Erik has now consigned Aethelflead to a cage suspended from the ceiling. True to their Biker-Gang clothing style, said cage is equipped with some ugly-looking spikes protruding from the top. So, when Uhtred and co. including the Welsh warrior priest Father Pyrig  come to the rescue, plans have changed and they now have to rescue her from a cage. As an aside, what was going on with the armour worn by Uhtred’s latest companion, Alfred’s supposed illegitimate son? I can’t have been the only one who noticed what looked suspiciously like a Crusader Cross on his breastplate.

Meanwhile, naughty Odda has bought an army to Benfleet in contravention of Alfred’s orders, and the angry King follows close on his heels. Uhtred raids the hall at Benfleet, lots of fighting ensues, Aethelflead hugs lover boy Erik, who gets stabbed by his angry brother, leaving a weeping Aethelflead to be taken back to the Saxon ranks.

At this point, remembering she was meant to be a warrior woman, Aethelflead shouted out for someone to give her a sword, but wicked daddy won’t let her, and she is taken to safety.

Finally, Aethelflead having returned home and sported the same dress she has worn for most of the series, gets Uhtred to swear fealty to her. In a final twist, worthy of the notorious Mel Gibson movie Braveheart , ‘Fleda reveals she is pregnant by Erik, implying that her daughter Elfwyn who will feature in the next series, was actually fathered by a Viking adventurer. Naturally. Who can resist a handsome Viking with a snazzy hairdo?

Whilst the closing sequence of the series might be considered an example of good storytelling, it’s no more than that. There is a much later legend which has it that Aethelflead fended off a Viking attack on the way to her wedding, but no evidence exists of any capture. Fans, desperate to defend their belief in the ‘accuracy’ of the series will assert that this is because the whole episode was so shameful that Alfred would have wiped out all record of it.   Contrary to popular opinion, it would not have been so easy to do this considering all the money supposedly involved. Not to mention that an experienced warrior such as Ethelred would hardly have been so careless as to take his wife with him on campaign only to leave her  unprotected. 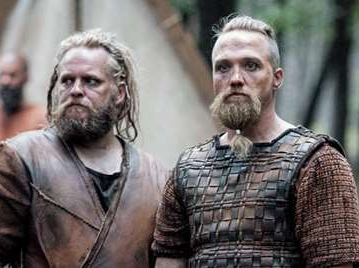 The depiction of Aethelflead as a vulnerable damsel in distress desperate for ‘love’ and fulfillment outside of marriage is a trope of the fiction genre, and should be taken as such. At the time of the attacks on Wessex and Mercia in the mid to late 880s, Aethelflead attended a conference related to town planning in London, from which she learned much that she would later put into practice in Mercia. She then returned to that Kingdom, where she would have been learning to run her household and lead the Mercian court. Might not make for such an interesting story, but it’s what high-born women did down the centuries, and its more useful and fulfilling then mooning over the nearest blue-eyed Dane.

What about Alfred, was he just sitting at home like a coward, antagonizing his nobles? Unlikely. In fact, his new system of shoring up the defences of his Kingdom seem to have worked, when the people of Kent were able to fend off a raiding for in 885, whilst the King’s army mopped up any remaining opposition. The sources tell us that after this a portion Danes who camped at Benfleet feel to fighting amongst themselves and eventually just returned to France from whence they had come. Shortly thereafter came Heasten, who proved more of a permanent thorn in Alfred’s side. He’s the blonde guy with excessive guyliner in this series.

So, in conclusion, Aethelflead’s appearance has been less than satisfying in this series. I appreciate that a storyteller must fill in the gaps, and use their imagination, but few of the characters in the series, new or old came over as very remarkable or memorable. Aethelflead was too much of a typical over-romanticized, vulnerable, pretty heroine. Fathey Pyrig had his moments, but even the ostensibly Welsh priest, like his countryman Asser in series one, showed no sign of a Welsh accent. An aspect surely as frustrating for our Welsh neighbours as for viewers in the rest of the United Kingdom.