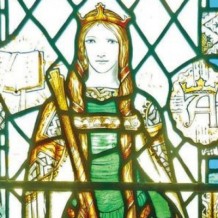 I’m a country girl, a Medieval History graduate, avid reader, and now a Published author. My first book The Warrior Queen: The Life and Legend of Aethelflead, Daughter of Alfred the Great was released in May (and on August 1st in the USA).

My interest in history started from an early age, with my family’s unhealthy fascination with the subject, and some of my most vivid childhood memories revolve around the many visits to Castles, Roman forts, and jousts.

My focus on Medieval History started as a result of filling the gaps in my knowledge after leaving school, at the realization that I knew almost nothing about what happened between 1066 and 1485, or before the Norman Conquest.
Consequently, I took up the far from ordinary pursuits of working through Bede, Shakespeare’s Histories, Michael Wood books and various Documentaries for the next few years, before finally settling on a degree in Medieval History in 2010.

Seven years later, I’m studying for my Ph.D. on Women and Feudalism in the later Middle Ages, with a focus on Late Medieval records with an unfortunate name, prone to misinterpretation.
Despite my specialization in Late Medieval English history, the history of all of Europe and beyond throughout the Middle Ages is of interest to me, and I continue to read up on anything remotely Medieval.  My book is about a Tenth-century Saxon Princess, and my shelves contain an eclectic mix of title on everything from Anglo-Saxon blood feuds and Legal History to German Chivalric Romances.