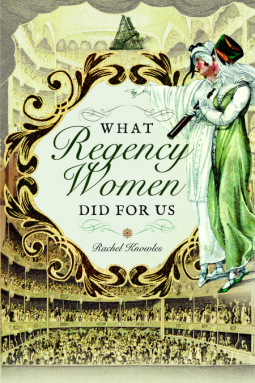 Regency women inhabited a very different world from the one in which we live today. Considered intellectually inferior to men, they received little education and had very few rights. This book tells the inspirational stories of twelve women, from very different backgrounds, who overcame often huge obstacles to achieve success.

These women were pioneers, philanthropists and entrepreneurs, authors, scientists and actresses women who made an impact on their world and ours. In her debut non-fiction work, popular history blogger Rachel Knowles tells how each of these remarkable ladies helped change the world they lived in and whose legacy is still evident today. Two hundred years later, their stories are still inspirational.

This was a good book with short biographies of each woman, some well known, like Jane Austen and Elizabeth Fry, but many unknown and forgotten. Which is sad, because so many of them made important contributions to society as scientific pioneers, writers, and even an engineer who patented the first suspension bridge.
Even where they have been commemorated in our modern age, many aspects of their lives are sidelined or ignored, such as the Fossil Hunter Mary Anning’s strong religious faith.

For me, this book was outside my comfort zone. People might even ask what a Medievalist is doing reviewing a book on the Regency era, but I don’t believe in restricting myself to only one period. Even for someone like me, whose familiarity with the period is minimal, to say the least, this could prove an enlightening and encouraging read.

Thanks to Pen and Sword Books for providing me with a PDF copy to read and review. I was not required to write a positive one, and no incentive was given.