I’ve decided to write a very brief commentary on Series Two of The Last Kingdom series, with a focus on those aspects which relate to King Alfred the Great and his family, who are of course the subjects of my book. As the question ‘Is it accurate?’ often comes up in relation to historical Fiction and Drama generally, I hope to provide a useful guide to sift at least some of the facts from fiction.

Be warned: I am no expert on period clothing, or architecture, so I cannot comment on these.

As the first series was in fact based on the first two novels in Bernard Cornwell’s Warrior Chronicles series, this is clearly based on the third one Lords of the North (and most likely the later episodes will be based on the fourth Sword Song. So, Episode one is supposed to pick up where the first one left off in early 878 after Alfred’s phenomenal victory at Edington.
The only problem is there are some serious discrepancies in the ages of the Characters. Or more spspecifically, one character, Aethelflead. She makes only a brief cameo in this episode, sparring with one of her father’s men but she is quite clearly grown up, by the standards of the time. A teenager. The problem is that Alfred married c. 868, so his firstborn daughter could not have plausibly been more than 10 years old.

Our first glimpse of Aethelflead 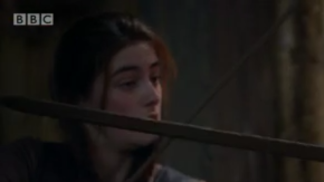 I understand that making her older is necessary to move along her story, but there’s also the fact that none of her siblings seem to come into the story, such as Edward Alfred’s second surviving child. We don’t know what the difference in age was between them, and one can only assume he will be introduced at some later point, but at the moment one could be forgiven for thinking the West Saxon royal couple had only two surviving children. Aethelflead, and the baby who was saved by the witch last season.

Also, seriously, what is going on with Alfred’s crown? I mean with that Fleur de Lis on it. Even with my limited knowledge of livery and heraldry, I know that’s a symbol associated with the Kings of France in the later Middle Ages.

Pretty unremarkable. Uhtred the superhero has done superhero things, helped the slave get the throne of a place called Cumbraland (modern-day Cumbria), get the girl (his sister), but the wicked Abbott gets him sold as a slave.

Aethelflead again makes a brief appearance, at the table with her parents, petitioning them to send aid to everyone’s favourite action man. Readers of the books will know that she is there described as having Golden Hair, which is how I imagine her, although here his is a brunette. Oh, and her parents are planning her marriage.

Uhtred is now a slave, and in some very Ben-Hur type scenes, is trapped in a Viking ship, where is basically a Galley slave, rowing his days away.  He strikes up a friendship with one Finian, and Irishman and fellow slave, who becomes a long-term companion. I’m in little doubt the reliable and steadfast Irishman is little more than Uhtred’s answer to Patrick Harper from the Sharpe novels.

Back in Wessex, Alfred’s court receives the King of Wessex and his nobles. Coelwulf, the last King of Wessex is depicted as an old man, on his last legs, who seeks military aid from Wessex, to repay the aid he gave them in the past. We don’t know how old the historical figures of Coelwulf (II) of Mercia was. In fact, we know next to nothing about him at all.Curiously in this episode Ceolwulf, mentions Mentions Mercian soldiers at Edington. Curious, because this is traditionally viewed as a West Saxon victory, in which the men of Wessex and their retainers rallied around their exiled King. There is no evidence I know of that Mercia had any involvement.

When things get a little heated, an angered Ceolwulf says that Alfred created ‘Daneland’ –  referring to the region that became known as the Danelaw. Well, yes, it’s technically true that a treaty between Alfred and Guthrum did create the Danelaw, but the Anglo-Saxon Chronicle tells us that Ceolwulf himself had agreed to a division of Mercia sometime around 877. Negotiations come to an end when Ceolwulf suddenly dies, right then and there in Alfred’s Hall (with some implication of foul play on Alfred’s part).

Again, the dearth of records allows some scope for literary licence here, as we don’t know what happened to Ceolwulf: he simply disappears from the records in the period between 878-880, to be replaced by Ethelred, Lord of the Mercians and the husband of Aethelflead. It’s widely believed that he died, how and why are not certain. Some speculate he may have been deposed by the Mercian nobility, others have suggested involvement by Alfred, perhaps even in collusion with Guthrum- but there is another, fascinating theory that he died in Battle against the Welsh. You can of course read more about this in Warrior Queen next month. 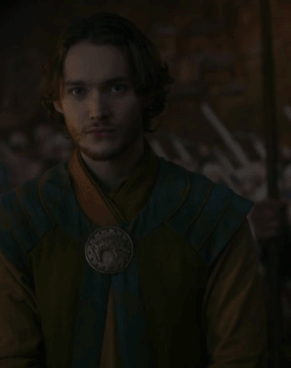 Our first glimpse of Lord Ethelred

His bride to be looks happy

In the aftermath of all the ruckus, Alfred and Queen Ealswith commence negotiations with the new ruler of Mercia to marry their daughter. The marriage is shown in Episode Six tonight. Tune in here next week for a summary of the next three episodes up to Six.